CESSDA Catalogue Will Boost the Visibility of FSD's Data in Europe

FSD and CESSDA, the Consortium of European Social Science Data Archives, already have a mutual history of almost 20 years, but Finland officially joined the new CESSDA ERIC last November. At the same time, the Finnish Ministry of Education and Culture designated FSD as the national service provider for CESSDA.

For years, European data archives have worked together at CESSDA so that European researchers could use seamlessly working international services to find research data related to their fields. The benefits of CESSDA will begin to show in a more tangible way this year as the shared data catalogue of European data archives is finished and researchers are able to find foreign data easily.

CESSDA's data catalogue will include all descriptions of archived data from all CESSDA service providers. This means that researchers can search for data simultaneously from anywhere in Europe. Quantitative data will be the first to be included in the catalogue. 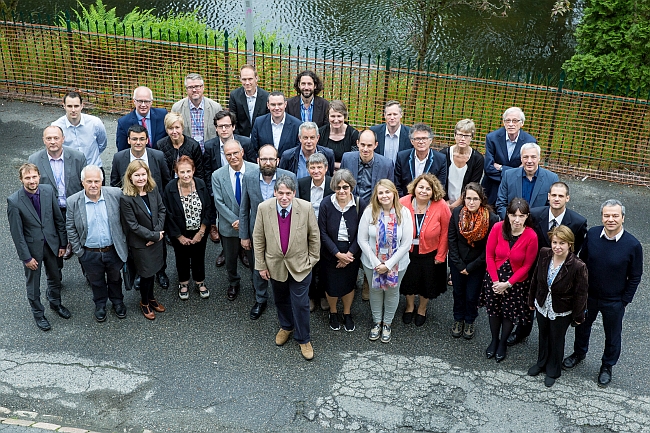 The CESSDA General Assembly was held in November in Vienna.

CESSDA's data catalogue will also include FSD's study descriptions in English, which makes it possible for any European researcher to find them easily, but also to understand the content.

Laaksonen also encourages Finnish researchers to use the data catalogue for searching international data in fields that they are interested in.

"One should view international data similarly to international scientific publications. Finding interesting data could lead to collaboration with researchers that work elsewhere in Europe," she hints.

In addition to the data catalogue, CESSDA's web page will receive other new features in the near future, such as an international question bank and a vocabulary database.

No need for reinventing the wheel

The CESSDA membership does not only benefit researchers, but data archives as well.

Small, developing data archives will naturally benefit the most from CESSDA, as they get to extensively utilise solutions developed elsewhere and training offered by data archives in other countries.

Laaksonen, however, is certain that large, stable archives benefit from the cooperation as well.

"The international visibility offered by the shared data catalogue is one thing that we could not offer to our clients as a solitary data archive," she remarks.

"We also get to benefit from training offered by other service providers."

Moreover, being a member of an organisation such as CESSDA is a significant advantage when applying for EU funding. An EU funding application requires international partners, which already exist at CESSDA. Collaboration with other ERIC organisations is also effortless through CESSDA.

One of the most important advantages of CESSDA, according to Laaksonen, is that data archives from different countries do not all have to develop similar tools and operating models, but instead, solutions that have been developed once can be used in all member countries.

"Many things should rather be done in cooperation than alone," she says.

FSD is committed to CESSDA's requirements

As a member of CESSDA, Finland is committed to pay CESSDA's membership fee and thus support the organisation. CESSDA's funding consists almost completely of the member countries' membership fees.

FSD is also bound by requirements set by CESSDA to its service providers.

"For instance, all CESSDA service providers are required to get a CoreTrustSeal (CTS) certificate to prove their reliability in data preservation," says Laaksonen. CTS replaced the Data Seal of Approval (DSA) certification last year.

FSD was awarded the DSA certificate for the first time in 2014 and the newer CTS certificate, as required by CESSDA, in the autumn of 2017. Only the German GESIS had a CTS certification before FSD in Europe.

In addition, CESSDA service providers commit to policies concerning the accessibility of data as well as persistent identifiers and established data description practices. The goal of the common policies is to ensure that services for social science researchers in CESSDA countries are as compatible with each other as possible.

Developing CESSDA's own services requires common operating models as well. The shared data catalogue, for instance, would not be possible if all service providers described their data differently.

FSD also works to advance the compatibility between services developed by other Finnish organisations and CESSDA.

"FSD working as the link between domestic and European services would be the optimal scenario," Laaksonen says.

FSD participates in the development of CESSDA services, policies and tools in a variety of projects.

For instance, Finland is leading the Metadata Management project that has developed a standardised metadata model for CESSDA service providers.

In 2018, FSD will also be participating in projects involving data management training, CESSDA's new question bank and data catalogue, and improving the reliability and technical infrastructure of service providers.

"We have a lot of expertise at FSD that CESSDA has been able to utilise," Laaksonen says.

Laaksonen is, in particular, waiting eagerly for CESSDA's new researcher-oriented services, such as the data catalogue and the question bank, to be released.

"Researchers may have a rather abstract view of CESSDA's activities before these practical services are introduced," she thinks.

Laaksonen hopes that the services will be promoted actively to researchers and students all over Europe when they are released.

"The hours spent developing these services and a great infrastructure will not be of much use if researchers are not able to find them."

FSD as a member of CESSDA